A few playtesters have been putting the game through its paces, and I now have a much better picture of what works, what doesn’t, and the areas that need focus to advance the game to the next stage.  In today’s post I’ll talk about the issues that playtesting has highlighted, using them as an opportunity to describe how the game works, and giving you an insight into the challenges of building the game.

Star Dynasties is turn based.  When the player ends their turn, six months are simulated.  A lot can happen in the galaxy in six months. When an important event happens (for example, two neighbouring factions go to war), the player is shown the event in a popup message on the map called an update.

It’s a challenge to figure out what’s important enough to tell the player, and what can be filed away for them to optionally review later.  If too much is popped up, the player will be bored by irrelevant information and will find it hard to get into a flow. On the other hand, if too much is hidden, the player will miss important events and the opportunity to take advantage of them.  Right now, the balance is leaning in the direction of too many updates being shown, and I’m working to make the importance calculating algorithm smarter. This is not trivial; the same type of event may be shocking if it happens to your neighbour or your brother, but not interesting at all if it happens to someone with whom you have no connection.

Related to this is the interface that the player can use to review everything that’s happened, which comes in two parts; a contextual control so that the player can see the full history of updates that are related to a particular character, faction, etc., and a window from which the player can quickly browse everything that’s happened in the last turn, if they want to drill into the detail or to make sure they missed nothing they care about.  I am currently experimenting with the latter, trying to adopt some UX lessons from social media feeds to make it more digestible.

We’ve racked up a lot of time in the world by now and it’s been a great test for whether this model is working realistically and believably in the game.  The dynamic of empathy, where a character will empathise with the events that are happening to another character (including changing their opinion of those that are hurting them or helping them), needs fine tuning… characters are perhaps too emphatic at the moment (what a problem to have!).

The other area that needs balancing is how difficult it is to remain popular.  How effective is diplomacy? How hard is it to please everyone, or to please enough that you can maintain your power?

One of the most challenging aspects of building Star Dynasties is controlling how the world evolves over time.  The simulation consists of many characters that are making selfish and blinkered decisions in their own lives, and the impact of all those decisions on the story of the world can be quite chaotic.

For example, a leader’s son in a position of power might abuse his privilege because he feels untouchable.  Later, a prominent character may demand that the leader do something about these abuses. If the leader stays loyal to his son and refuses, his political standing will be damaged.  If his position was precarious, the chain of events may be the straw that breaks the camel’s back and moves a disgruntled ruler to start a rebellion. 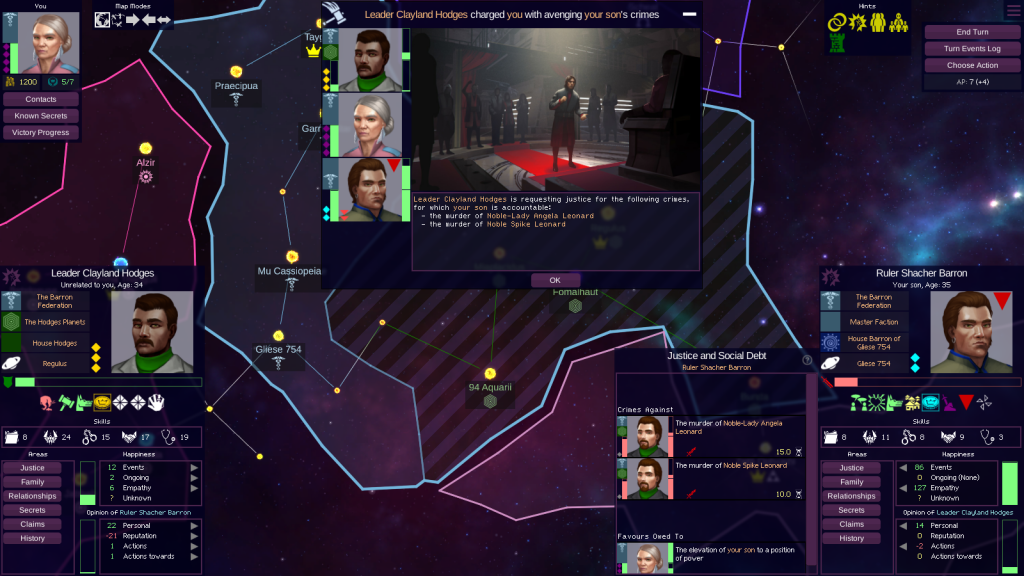 It’s this chaos that generates interesting stories for the player.  It also makes it quite hard to make sure that, when all these events are summed up, the behaviour and life stories of characters in the eye of the storm (such as leaders) are realistic.  And right now this is an area that needs some balancing. Characters are too impulsive and ready to break the law, and the aggregate impact of that universal risk-taking is an unstable world, where factions and leagues can rise and fall overnight.

The game has a steep learning curve.  The interface is somewhat dense, and there’s a lot of knowledge about how the world works that a new player just won’t have at the beginning.  The first hour is daunting, and I fear that some players will not push past it to get to the engaging game beyond.

To some extent, this is just the nature of the genre.  It’s hard to have a rich, complex game that is also easy to get into, and it’s hard to create some kind of introductory / tutorial version of the game, when so much of the simulation is interlinked and interdependent.  You can’t switch off segments of reality so that the player can be brought up to speed gradually.

I’m brainstorming three ways to deal with this problem;

The most important thing to have come out of extensive playtesting is a crystallization of the core gameplay experience.  For a long time I had put my faith in the belief that if I built a world simulation that was realistic and gave the player the role of a king or queen in that world, then the gameplay and narratives that would emerge would be interesting and fun.  It’s been gratifying to see that come true as the game has matured.

Paired with the thrill of playing this role through the stories the game generates, are the challenges of balancing between the various demands on your limited time (dispensing justice in your realm, maintaining your house, acquiring new territory, etc…), and maintaining a precarious political position in the face of the competing requests and agendas of other leaders and rulers.

The challenge increases as you grow in size; from a starting position where you have a lot of control over a small territory, your focus is outward, and you have limited options but no real competing demands; to a point where you have tenuous control over a large territory, your focus is directed inwards, and you have a lot of options but a challenge in using them to meet a larger set of demands.  And the journey isn’t linear; rebellions, succession, bad luck, etc… create setbacks that ratchet the player back at various times and provide a kind of snakes-and-ladders dynamic to the gameplay.

As I add more content, the details of what the player will do on a particular turn will change, with a greater variety of action and events, and my challenge is to make sure that the gameplay remains true to these dynamics.

One Reply to “Playtesting Notes”