The big news this month is that I’ve made good progress on an editor for adding story events to the game. I will be making this editor available to everyone eventually as a modding tool, and I can’t wait to see what people will come back with.

Let’s quickly put together a story event so you can see how it works.

I’ve also been putting together a test pack of story events to thoroughly test the editor and add more content to the game. So far I’ve reproduced all the 18 story events that I prototyped in v0.4 via the editor, and added another 23. Some of those are multi-part stories that can span multiple turns. For example, if you have a hot-headed character as your head of military, you might get the following. 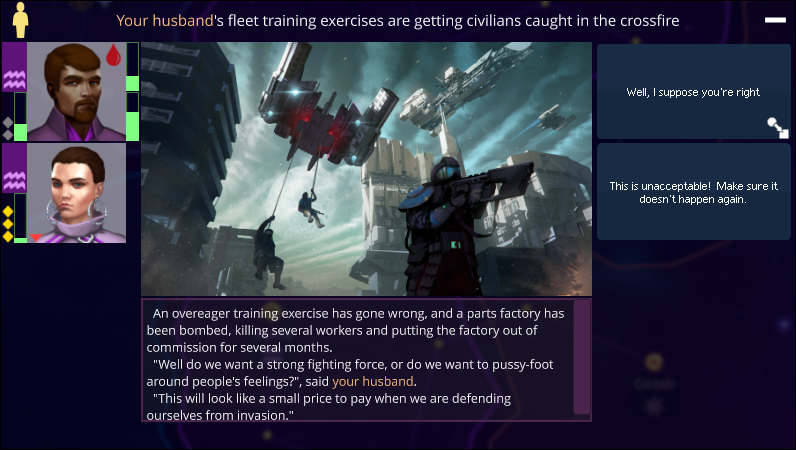 If you let him run the training as he wants, he’ll occasionally get you into further trouble…

Another benefit of the story event editor is that the game can show the player what the effect of a choice will be.  E.g., the following is the tooltip you will see for a choice in a story about experimenting with a new medical treatment.

Not all the stories I’ve added have fleshed out descriptions, I’ve been focused more on the functionality at this point. The rate at which I’m adding these story events is quite slow while I’m still working on the editor. But in future, putting together a story event should take me a lot less time than it would by coding it directly into the base game (like the core actions and events).

I’m wondering whether to run a Kickstarter. I feel the game needs more work, and I need some help to get it past the finishing line. I would love to add some more art to the game.  It would be nice to get some assistance on writing story events.  And I could use some help with making the UI more digestible. I had been planning to open up the game to Early Access on itch.io, but another option would be to run a Kickstarter with beta access for backers. I’m still mulling over my options, so any thoughts or suggestions are most welcome.

I’m going to be working on revamping the way updates work internally. That may not be exciting from a player’s perspective, but updates are one of the oldest piece of scaffolding in the game, with many pieces that have been duct taped on over time. It needs to be given some tender love and care before I stack a bunch of story events on top of it. There are two impacts of that which will be visible.

1) I would like updates to automatically tell you what has explicitly changed in the world as part of that event, rather than just contain a freeform description.

2)  I would like the game to be smarter in figuring out which updates to show you and which to hide.

Showing the Right Amount of Updates

Secondly, its difficult for the game to know what the player is interested in. Different players have different interests.  Its also difficult to work out how the “interestingness” of an update changes when it happens to someone you know or care about.  And how does the game even know who the player cares about?

If the game shows you too many updates you don’t care about, it becomes difficult to pay attention. If the game misses some updates that are necessary to understand the context you’ve ended up with (“wait… since when were those guys at war?”), it becomes confusing. So there’s a narrow sweet spot where the game shows you just the right amount of updates. I’ve already experimented with various approaches in this area over the development of the game, and I think there is one last set of refinements I can put in to put this one to rest for now.

Lastly, I’m going to try to be a little more active on social media and this blog. This is a struggle for me – I’m not an extrovert, and my natural inclination is to hide in my developer cave. However when people discuss the game and come back with comments I find it very helpful and rewarding, so I will do my best to do more of that.